The UNHCR is a global organization dedicated to saving lives, protecting rights and building a better future for refugees, forcibly displaced communities and stateless people. 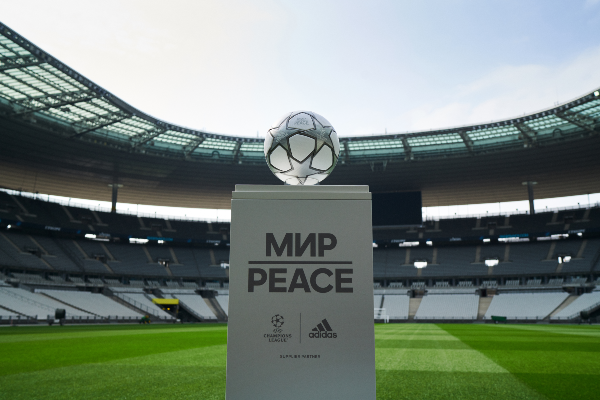 Available to bidders from across the globe, the unique, single item auction for the ball will take place live at 2pm BST on World Refugee Day – 20th June 2022, with Graham Budd Auctions accepting bids starting at £15,000 in the lead-up via http://grahambuddauctions.co.uk/uclfinalball.

A donation page has also been set up via https://donate.unhcr.org/global/en/uefa-champions-league-final-match-ball for viewers and bidders to support the cause even if they do not participate or win.

The Marketing Store are proud to have played a role in bringing this important campaign to life through strategic content and comms planning for adidas and UEFA social channels and working in partnership with the UN and the Graham Budd on their comms rollout and donations site. Alongside playing an active role as an intermediary for adidas, UEFA, The United Nations Refugee Agency, and Graham Budd Auctions.

Using one of sport’s biggest stages as an opportunity to unite the world in a global message of peace, the ball - inscribed with the words ‘мир | PEACE’ – was not made available for retail and was used only during the match in Paris between Liverpool and Real Madrid on May 28th, 2022.

Placed on the ball in bold lettering as a statement from UEFA, ‘мир’ in Cyrillic script can be translated as 'peace', which sits above the word in English – PEACE. The ball was designed to carry a simple message of peace, belonging, and hope that was passed from player to player with every kick of the ball from the Stade de France to the furthest corners of the world. The broader design of the ball is noticeably devoid of colour, featuring pure white panels to symbolise truce and unity.

The official kick-off match ball was handed over to adidas to put up for auction courtesy of UEFA and the UEFA Foundation for Children.

Gonzalo Calvo, Global Director Of Brand Communications, Communities and Culture at adidas said, “Since it began, the love of the game has brought people from all over the world together through one simple object – a football. Now, we look to turn this unity into action in order to support a cause that needs urgent attention. With the UEFA Champions League Final Official Match Ball not made available for retail, the Kick Off ball presents a unique opportunity to own a small piece of sporting history, and to help those suffering across the globe.”

Urs Kluser, UEFA Foundation for Children said, “We are proud to be able to support such a worthy cause with the auction of an iconic piece of sporting history, and hope that its proceeds help make an impact to some of the lives that have been affected by conflict and persecution.”

Andy Taylor, Chief Creative Officer, Global Portfolio, The Marketing Store said, “This campaign has been a true pleasure to work on and an amazing opportunity to show that human value is worth more than commercial gain. With millions and millions of people displaced around the world, we hope this one ball will not only pass a message of peace, but also make a physical difference to many people who are affected by conflict”